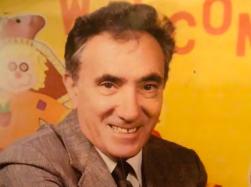 Sal Nicosia is a beloved former teacher, counselor and mentor in the Patchogue-Medford schools, and also a U.S. Air Force veteran, author, public official, community advocate and tireless volunteer. Nicosia served in post-World War II Japan, after which he earned a bachelor of science degree from City College of New York.

He began his career as a Social Studies teacher in the P-M district in 1956 and served for more than 30 years as a teacher and then as a crisis counselor for elementary students. Nicosia served as the first president of the Patchogue-Medford Teachers’ Association from 1962-63, created the first breakfast program in the Patchogue-Medford schools, and helped establish the first New York State Child Protection Law in 1973.

After his retirement from the P-M District, Nicosia served as a consultant to BOCES, Director of Counselling Services for the Smithtown Christian School, and as an assistant professor at Dowling College. Beginning in 1975, Nicosia became active in government, first by appointment to the Child Protection Planning Committee by Suffolk County Executive John V.N. Klein, and then as a 1976 candidate for the U.S. Congress. Nicosia lost that election, but continued his political work as a legislative aide to a number of state and county officials.

Currently, Nicosia is an advisor to State Senator Thomas D. Croci. In 1997, Nicosia authored “Empowering Our Children,” which motivates and stimulates young people to participate effectively and knowledgeably in the political process, and to continue to do so as adults. The book has been adopted into the curricula of at least seven Suffolk County school districts.

Today, Sal is over 90, and still wakes up every day ready to go out and work for the betterment of the people of Suffolk County.o get his doctorate from UCSF and did post-doctoral work at Harvard University before becoming director of the biotechnology company Tulark in 1997.